About the VRITRA HEXA update (Translated from: https://note.com/saddy575/n/n58c6dd7ebb51) 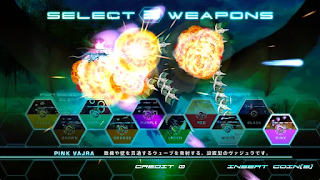 As announced at the "Shoo Festival" held at Game Center Mikado the other day, VRITRA HEXA will be updated soon to version 1.1.0. Basically, the main contents are addition of new Vajra / balance adjustment / bug fix.

This information is current as of June 12, 2021. Please note that there may be balance adjustments etc. again after the location test.

We have implemented the 11th weapon "Pink Vajra". It will be the first complete penetration weapon in VRITRA. It requires unprecedented operations, but I feel that it has become an interesting weapon that is easy to handle even for beginners and tricky for advanced players.
I think it will play an active role in HEXA mode, but there are some features that are especially useful in caravan mode, so please try it out.

In caravan mode, we have implemented a function that allows you to retry only once within the first minute. If you make a mistake at the beginning, you can press the start button to restart the game from the beginning without throwing it away.

In version 1.0.0, the performance of Vajra, which was not very strong and the usage rate was low, has been revised upward and the balance of all Vajra has been averaged.

HEXA mode adjustment
Adjusted the stress points to make it easier to play. Also, since the high score ranking is shared by the old and new versions, we have made fine adjustments so that the score is slightly higher in version 1.1.0.

Caravan mode adjustment
For the caravan mode, we have improved the feeling of exhilaration and adjusted the parts that were very tight so far. I think that the balance is just between the PC version SET SUNA mode and v1.0.0.

Bug fix
We have fixed the problems as follows.
・ Prevent the falling bullets of the stage 4D boss from slipping through the boss body
・ Unification of stage 4C boss names (DEMON EYE)
-Adjusted left and right loop processing when Vajra is selected
・ Only active players can operate the menu
・ Correct boss conditions
The above "Make the true boss condition correct", but in version 1.0.0, there was an implementation mistake that "Rank 7 conditions from stage 1 to 3 do not have to be met" ... As a result, even if you do not do your best in stages 1 to 3, you will be able to challenge the true boss if other conditions are met.

With this update, HEXA mode is easier to play, more weapon choices are available, and caravan mode is more exhilarating tuning.

Posted by westtrade at 1:31 PM No comments: