Back in January I posted that the PGM 3 had been released. Well it took a while but I was able to get the system for my collection. Currently the only game for the system is Knights of Valour 3 HD but after looking at the hardware, it is easy to see they built the system with some forward thinking.

Lets take a look at the PGM 3 Hardware: 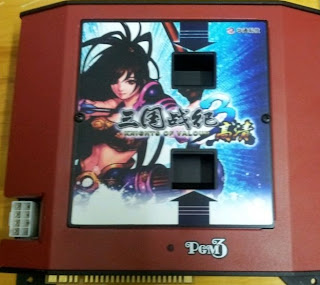 PGM 3 with game removed. Note that the game has 2 screws to keep it held in place.

The Top of the case and the bottom are made out of metal. Good stuff here.

Note that the PGM 3 does not have a Varta battery. :-)

Now lets take a look inside Knights of Valour 3 HD:

The game itself is enclosed in a metal case. The artwork you see was printed on some type of material and then added to the case.

Note the 2nd SD card reader and 1 gig of ram on this side of the PCB.

On the other side of the PCB, 1st SD card reader, 1 gig of ram and the CPU under the heat sink.

The game case itself. And here is the game is all its glory, lol

As far as gameplay goes, the game plays great and looks good in a HD cab. There are many paths you can take and lots to explore. Once the game is loaded, load time is next to nothing. Because the game came with two card readers and 30 game cards, I can level up my characters and buy power ups with in game money. Each game card lets you play 999 times before you have to transfer your data to a new card. I will have some videos with gameplay at a later date.

If you have questions, let me know in the comments below.